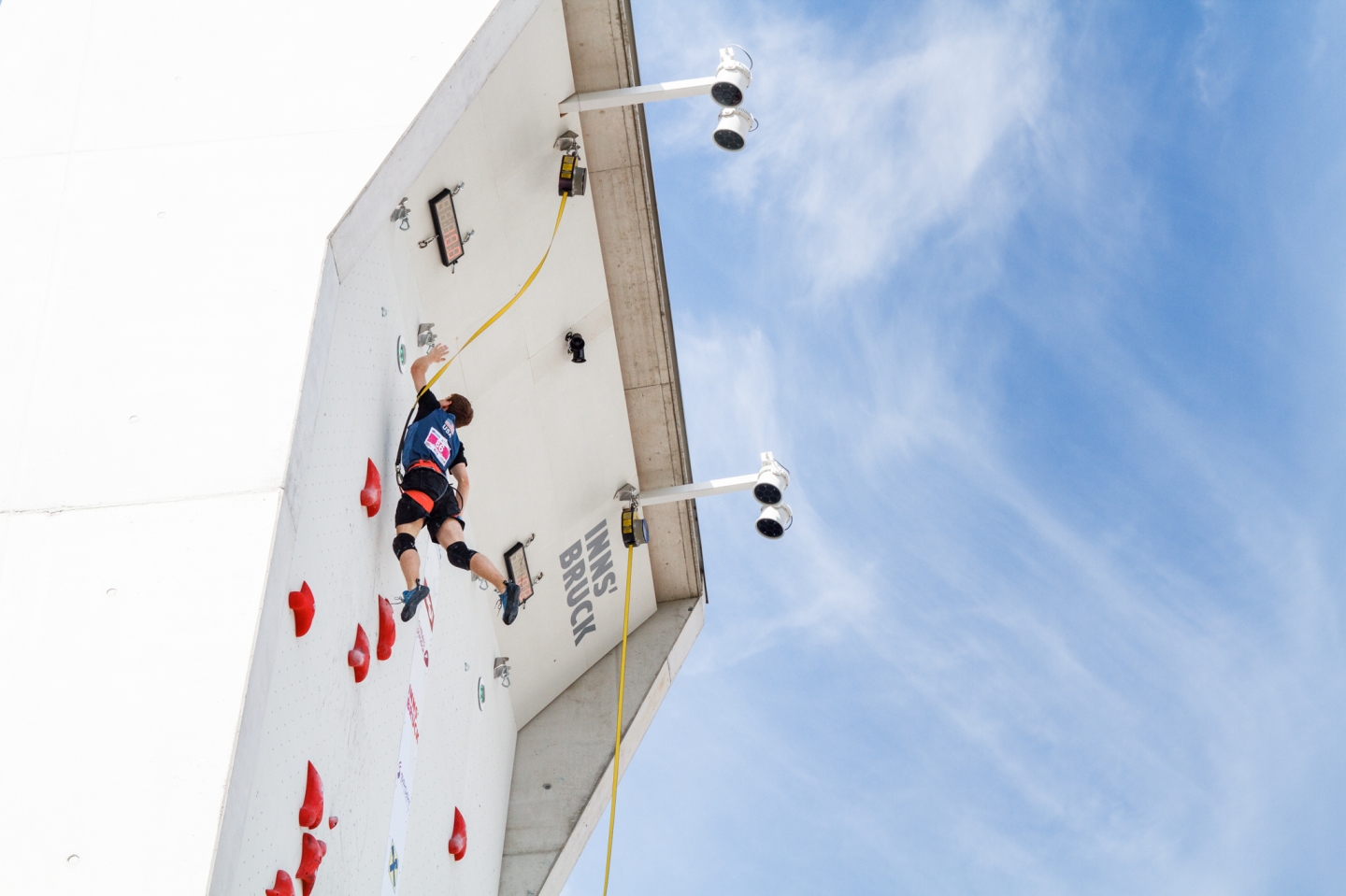 Authors: L. Reveret, F. Quaine, S. Courtemance, P. Kry | Year: 2018
Summary: Researchers compared 11 climbers averaging 5.10d to 5.14a using two methods of understanding joint torque in climbers: kinematic data (information about the body through video motor capture) from OptiTrack video equipment and force plate sensors designed to capture information about force applied to climbing holds.  The kinematic data had an accuracy of 20 to 35% of body weight, which the authors interpret to be similar, if not perfectly ideal, to force plate information. Beta-Angel note: in other words, video may be an imperfect solution to the challenge of force plates.
Reference: 2018 Rock Climbing Research Association Symposium in Chamonix France
https://hal.inria.fr/hal-01963016

Author: D. Orth, G. Kerr, K. Davids, L. Seifert | Year: 2017
Summary/Results: Researchers looked at how climbers adapt to routes.  They discuss the state of the science to date regarding spatial (such as center of mass movement across a route) and temporal (such as quantifying time performing an action) indicators of climbing fluency and attempt to integrate them.  They specifically seek to relate climbing actions with whether they increase or decrease measures of climbing efficiency.  Beta-Angel note: There are too many gems in this one for me to attempt to summarize a conclusion.  Thankfully it’s open source!  This article should be required reading for anyone interested in the research behind climbing movement economy.  It also has significant practical application.
Reference: Front Psychol. 2017; 8: 1744.
https://www.ncbi.nlm.nih.gov/pmc/articles/PMC5635808/

Author: L. Seifert, D. Orth, C. Button, E. Brymer, K. Davids | Year: 2017
Summary/Results: A chapter from a book entitled Extreme Sports Medicine describes how climbers are influenced or “constrained” by certain aspects of their environment, such as task constraints (e.g. preview of the route and safety demands), environmental constraints (e.g. wall slope, hold texture, etc.), and individual constraints (e.g. ability level, anthropometric factors).  Specifically, they describe how uncertainty within the climbing environment impacts the psychology (mind-related) and physiology (body-related) of climbers and how the athlete’s exploration of his/her environment is related to performance.  The authors suggest that success in performance is a constantly shifting, very individualized adaptation to the athlete’s environment that can be impacted by a feedback loop which constantly looks for more information and opportunities for action and translates them into movement.  Beta-Angel note: One of the more interesting aspects of this chapter is a “practical application” section, which amongst other things, suggests the importance of making training mimic the uncertainty and mindset of performance.  The authors note that a major challenge involves setting up the ability to “efficiently [explore] in a manner that manages the dangers of performing in unpredictable contexts.”  The practical potential of creating a learning paradigm centered not only around the efficiency of what you already know, but the effectiveness of exploration when presented with an unfamiliar environment, deserve considerable thought and further research.
Reference: Chapter from book Extreme Sports Medicine pp 365-382
https://link.springer.com/chapter/10.1007%2F978-3-319-28265-7_28

AUTHOR: O. Shulga | Year: 2014
SUMMARY/RESULTS: The researchers assessed height, number of hand movements, the number of leg pushes, as well as time (in seconds) to the top of the wall. The researchers found a correlation between being height and the number of leg pushes, but while the taller climbers had faster times and fewer hand movements, neither were statistically significant. Beta-Angel note: While we tend not to include non-English research, this particular article was written by the speed coach of one of the girl’s we sponsor for sport climbing and bouldering. It also doesn’t hurt that the Beta Angel’s Aleksnadra can translate Russian.
REFERENCE: Sport Science of Ukraine No 1 (59), 2014
https://www.researchgate.net/publication/275154630_Model_characteristics_of_athletes-climbers_specializing_in_speed_climbing_format_record

Climbing skill and complexity of climbing wall design: assessment of jerk as a novel indicator of performance fluency

AUTHORS: Ludovic Seifert, Dominic Orth, Jeremie Boulanger, Vladislavs Dovgalecs, Romain Herault, and Keith Davids | Year: 2014
SUMMARY/RESULTS: Use of a performance indicator called “normalized jerk coefficcients” to explore effect of practice and hold design on performance. More “jerky movement” in the hips occurred when a hold had more than one potential way of grabbing it. Additional note that horizontal edges led to differences in technique, specifically a horizontal edge led to more turn-out “open hips” while a vertical edge led to more turn-in “hip to the wall”. Authors recommend that hip trajectory, rotation and orientation is important for ease and grace in climbing. Beta-Angel note: “Oh my god, do you even turn-in?” “Don’t be such a jerk!”
REFERENCE: Journal of applied biomechanics 30(5) · July 2014
https://www.researchgate.net/publication/263816970_Climbing_Skill_and_Complexity_of_Climbing_Wall_Design_Assessment_of_Jerk_as_a_Novel_Indicator_of_Performance_Fluency

AUTHORS: P.B. Watts, S. Drum, M. Kilgas, K. Phillips | Year: 2014
SUMMARY/RESULTS: Watts et al. tested six experienced climbers on an outdoor route on both lead climbing and top rope to determine how much their center of mass moved away from the straight path identified for the route, which is known as a concept called ‘geometric entropy’ (defined as movement of the center of mass from an ‘ideal’ trajectory for the route). Researchers concluded that geometric entropy does not differ between top-rope and lead climbing.
REFERENCE: 2nd International Rock Climbing Research Conference, Sep 2014
https://docs.wixstatic.com/ugd/441095_f52f11ccc489434bb70b78ee10563b95.pdf or full article at http://digitalcommons.wku.edu/cgi/viewcontent.cgi?article=1731&context=ijes

AUTHOR: PB Watts | Year: 2013
SUMMARY/RESULTS: Watts set out to determine whether repeated ascents of a route by 9 climbers change geometric entropy (defined as movement of the center of mass from an ‘ideal’ trajectory for the route). The research found that climbers reduce geometric entropy with practice and route familiarity and the lower entropy is associated with lower climbing energy expenditure. Beta-Angel Note: See Sibella et al. (2007) for more.
REFERENCE: Conference: 2013 Annual Meeting of the American College of Sports Medicine
https://www.researchgate.net/publication/269630138_Change_in_geometric_entropy_and_energy_expenditure_with_repeated_ascents_in_rock_climbing

Development of a performance assessment tool for rock climbers

AUTHORS: S. Brent, N. Draper, C. Hodgson, G. Blackwell | Year: 2009
SUMMARY/RESULTS: Researchers examined four separate ability levels on a test which measures the height gained from the lower to upper handhold after a climber makes a high step, shifts their weight, or “rocks” their hips, up over the foot, and initiates a climbing hand movement from the high-step position. Novice climbers had an average score of 59.5%, intermediate 71%, Advanced 82%, and Elite climbers 90%, suggesting that this test is a useful measure of climbing performance.
REFERENCE: European Journal of Sport Science, Vol 9, Issue 3, 2009.
http://www.tandfonline.com/doi/abs/10.1080/17461390902741132

3D analysis of the body center of mass in rock climbing

AUTHORS: F. Sibella, I. Frosio, F. Schena, NA Borghese | Year: 2007
SUMMARY/RESULTS: Researchers searched for common patterns and differences in climbing strategies by studying “geometric entropy” (defined as movement of the center of mass from an ‘ideal’ trajectory for the route) in a group of 12 recreational climbers. Results suggested that the two main climbing strategies were associated with either preferring to emphasize agility over speed and power, or preferring power and more ‘force’ for the movement. While the authors note that they can’t conclude it as the gold standard, the best recreational climbers tried to minimize the power strategy. Beta-Angel note: See Bakker and Boschker (2002) for more.
REFERENCE: Human Movement Science 26 (2007) 841-852
https://www.researchgate.net/publication/5909775_3D_analysis_of_the_body_center_of_mass_in_rock_climbing

AUTHOR: Bursnall, Messenger | Year: 1999
SUMMARY/RESULTS: Researchers used a video analysis tool to compare the arm movement of five subjects on a wall in quadrupedal posture executing first a low reaching task and then a high reaching task. The primary purpose was to evaluate the use of the video analysis tool in identifying differences and similarities between the climbers for a simple hand movement, which it did. Results also support (1) Quaine et al (1997) in that while reaching for a high hold the body was positioned closer to the wall, and (2) suggestion that lower limbs are principally concerned with supporting body weight.
REFERENCE: International Conference on Science and Technology in Climbing and Mountaineering, 1999, Leeds UK.
http://dk.mors.si/Dokument.php?id=42&lang=eng

AUTHORS: Werner, Gebert, Kauer | Year: 1999
SUMMARY/RESULTS: Authors used video to analyze four climbers at the 1993 Innsbruck World Cup who were exiting a roof section of a climb. Authors conclude that it may be important to hold one’s center of gravity near to the wall and keep constant velocity in raising one’s center of gravity.
REFERENCE: International Conference on Science and Technology in Climbing and Mountaineering, 1999, Leeds UK.
http://dk.mors.si/Dokument.php?id=36